The Biologic Effects of Ionizing Radiation report was initially requested by the U.S. Environmental Protection Agency in 1996. Since then, there have been several revisions of the BEIR report, the last being the BEIR VII Report in 2005. BEIR VII was different in that it also looked at the effects of low dose (<100 MSv) radiation on humans.

BEIR VII estimated a 1:1000 risk for cancer from one 10 mSv exposure to radiation. This is the radiation exposure from one abdominal, pelvic, or chest CT. These are imaging studies we order very commonly in our practices. In fact, there were over 70 million CT scans ordered in the United States in 2007 with projections that this may cause 29,000 future cancers.

No one really knows whether there is significant risk from one CT scan. These estimates of risk are based on an analysis of large populations over time using a linear non-threshold extrapolation. However, even if the risk from one scan is small, it is not insignificant and people are exposed to so many studies over a lifetime.

The risk of cancer varies by age and gender. The risk of cancer is much higher for those under 20 years of age and for females. We need to be especially careful in imaging children. There are over 7 million CT scans performed annually on children in the U.S. Pediatric radiologists practice ALARA (as low as reasonably achievable) in imaging children, but nothing is better than judicious ordering to protect our children.

The radiation dose our patients receive varies by the type of study. Although plain films do not expose our patients to large doses of radiation, a CT of the abdomen or a barium enema is equivalent to about 750 chest x-rays, or more than 3 years of background radiation. 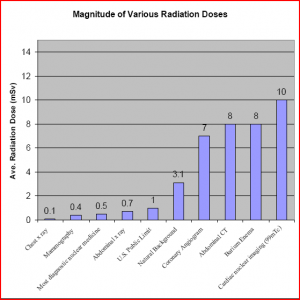 So yes, we need to be careful in ordering CT scans or other high-dose radiation imaging for our patients. This is our problem since the best predictor of radiation exposure in a population is the number of physicians in practice in that community.

You recall that Part I of this blog briefly referenced several recent developments in infectious diseases. Part II, here, will delve into a few that deserve greater attention.

I was recently asked to give a 15-minute rapid update on changes in infectious diseases that would be of interest both generally and for an audience of family physicians at the CAFP Clinical Update in San Francisco.

The list of interesting items was long and I pared the brief discussion to a few items. The list:

I have culled the following points from the long part of the short talk:

Antibiotics in sepsis – no comment as this wasn’t relevant to most PCPs.

Chikungunya – a mosquito-borne viral illness with over 6,600 cases in U.S. travelers to endemic areas of the Caribbean and even a few home grown cases in Florida – expect to see more in the southeastern U.S.

Dengue – getting close to a vaccine for this other mosquito-spread disease.

EV-D68 – this echovirus causes respiratory illness, particularly in the young with asthma, but it has now also been linked with a polio-like motor paralysis from which recovery is slow and/or incomplete.

Influenza – the vaccine was off-target this past influenza season. But we have learned that vaccination of a pregnant mother does extend protection to the newborn.

Measles – multistate outbreak linked to a source at Disneyland and spread among the unimmunized and in some cases the immunized. Perhaps Disneyland is not the Happiest Place on Earth for a while. 169 cases of measles reported to the CDC from January 1 to May 1, 2015, in 27 states. Wasn’t measles elimination in the US announced in 2000?

Microbiome – fascinating science about how the personal microbiome can affect individual health. Why are 80% of antibiotics used in animal husbandry? It has long been known that antibiotics cause animals to gain weight! Get that!

Moxifloxacin failure in 4 month treatment course of smear-positive TB in combination with other drugs compared to standard treatment regimens.

Carbapenem-resistant enterococcus – spread by endoscope with some fatal outcomes. Makes me sad to be a Bruin alum.

Pneumococcal conjugate vaccine – recommended for those needing pneumonia prophylaxis. Be aware of the separation and sequencing of this new vaccine and the older pneumococcal polysaccharide vaccine 23 (Pneumovax).

That leaves Ebola, HCV, C diff, PrEP, and ASSSI, which I will address in my next blog post.

Register for the blog