If an august, gray-haired professor delivered your medical school lecture on syphilis, or if you had to suffer the pontifications of a wise-acre resident on the I.D. service during internship, you may recall that syphilis was formerly known as “The Great Imitator.” A few other vernacular terms for the disease will be mentioned at the end of this posting, but don’t skip there just yet. If you do, syphilis may fool you the next time you see a patient with a nondescript rash.

Why are we bothering with syphilis anyway, when we are faced with more pressing problems like diabetes, cardiovascular disease, HIV, cancer, and  Alzheimer’s? Well, syphilis may not be as frequent as those conditions but it remains a common, and commonly-missed, disease. Part of the problem is that it can manifest itself in so many ways and mask itself in the guise of common problems like contact dermatitis, muscle tension headaches, osteoarthritis, URIs, alopecia, etc. It did not earn itself the moniker “The Great Imitator” for no good reason.

I do not intend this post to be an exhaustive treatise on the diagnosis and treatment of syphilis. The best place to find such information is in a textbook or UpToDate. But I do want to mention a few key points to keep in the back of our minds as we see patients: 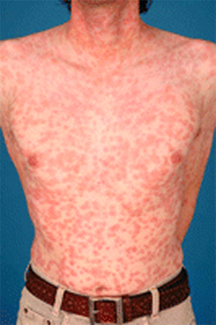 OK, in closing, let me mention a few other terms people use in referring to syphilis. A common clinical term is lues. On the street it can be referred to as bad blood, syph, or the clap. In 1494, it was called “French Disease” by soldiers from Naples when the French and the Neopolitans were at war with each other. The French, not surprisingly, called it “Neopolitan Disease.” In the interests of tact and diplomacy, we will avoid taking sides in this ongoing controversy.